"Air Gap" originally meant a computer or subnetwork was surrounded by "air" and so could have no data cable connections in or out, so it would be isolated from other computers & networks. These days it also means no radio-based network connection either (WiFi, Blueooth, etc.).

Some specialised hardware (e.g. hardware wallets) may also perform this function. If you believe you have such a device, please be certain that it offers isolation features for your stake pool or development and that you feel confident using these features.

Otherwise, generally you need a second computer to create this air-gapped environment, and the rest of this guide is to help you do that.

If you don't have an extra computer, or want to try building a standalone Linux environment on a USB drive, skip to the final section.

Option 1: Install your Air Gap environment on a standalone computer​

You will get better results from an Intel PC than a Mac:

You will need this computer's whole disc.

You can use an older machine: even a very old one.

We choose Ubuntu here because:

The rest of these instructions will assume the choice of Ubuntu for your Air Gap environment OS. If installing a different variant of Linux, please remember:

Decide in advance whether to encrypt your air gap machine's files.​

When setting up the Ubuntu filesystems, you'll be given the option of creating a Volume Group so it can encrypt your entire partition contents with a variant of the AES algorithm.

Your boot and UEFI partitions might not be encrypted, depending on the type of computer you have & version of the GRUB software with your OS installer.

Therefore, as a precaution, never attach a USB drive to your Air Gap machine unless you've either formatted the drive or built it as installation media.

The main advantage to encrypting your Air Gap system:

The main disadvantage to encrypting it:

As you follow the standard procedure (also linked above), stop at the points in the headings below to ensure you're installing your Air Gap environment correctly.

Before starting, there is no need to physically disconnect your chosen Air Gap machine from the Internet, or do anything to your home router to disable WiFi.

The Internet will be unconfigured and disconnected after the OS is installed & patched and a small number of initial packages are installed (including the Cardano CLI).

... paying partcular attention to these steps:

If your computer doesn't have a cabled connection, it is acceptable under our security model to add it to the WiFi network during OS installation.

Updates and other software​ 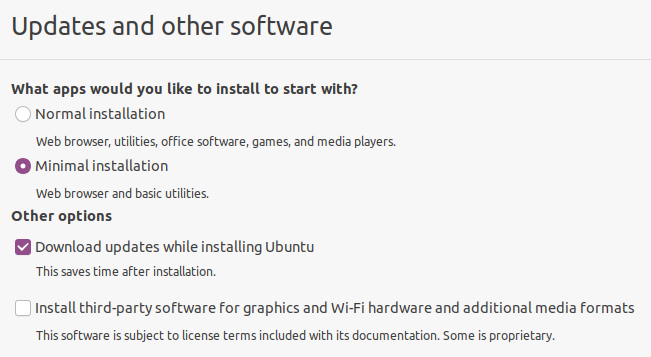 Select Minimal installation, since this is the least likely to leave you with security intrusive applications and services.

Do not select (as you normally would) the option for third-party software for graphics and WiFi because of the potential for institutional spyware.

Tick Erase disk and install Ubuntu.... you've already confirmed there's nothing else that needs to be kept on this computer, and that it won't have any other operating systems or working disks.

The Air Gap installation should not be a part of any dual-booting environment because of the inevitable security risks that would create.

Before you hit Continue, if you've chosen to encrypt your files:

(optional) Set up the hard drive for encryption​

Hit the button below the Erase disk option: Advanced Features which will at first say None selected.

Don’t hit the Continue button unless you can verify it now says LVM and encryption selected under Advanced options:

Enter the password you have prepared earlier as a volume decryption key.

Ubuntu will finish installing and then you'll be prompted to remove the installation media & reboot. When rebooting, you will see two things you may never have seen before:

Configure Ubuntu according to security recommendations​

At the screen "Welcome to Ubuntu" (which new users are currently forced to interact with), *refuse everything* it offers you:

Snap is questionable for security reasons because (like AppImage and Flatpak) it links application components with libraries that don't have to be compiled from source or security-vetted like the libraries that come with your OS itself.

Removing Snap is optional because default snaps on the Ubuntu installation media have the same security provenance as the default packages on that same release... yet snaps will also be upgraded in the next part of this procedure, and these upgraded snaps may not be subjected to the same security vetting.

This will upgrade everything on your system from what you received on installation media:

This is recommended because it will give you a means of taking password-encrypted notes that can move between your Air Gap and computer host environments in both directions, so you can:

LibreOffice documents saved with a password are entirely AES-encrypted with a key deriving from that password, which produces arguably the best commercially available security for files & data.

Whether a developer or a stake pool operator, at some point you will also need to encrypt files & folders so they can be extracted on your stake pool or application server, where LibreOffice will generally not run but you can use the installable command p7zip instead:

Adding the extra package p7zip-rar should make saving files with encryption & compression an option in your file manager (nautilus).

You might need to erase any trace of an unencrypted file that could lead to loss of your funds or Cardano enterprises if it were reconstructed. Therefore you should install the secure-delete tools to allow you to zero-write files & their metadata or drive contents & empty disk space:

This confirms that your system will start properly after having updated your system software.

Use the standard instructions here at the Developer Portal:

Note this will build cardano-node as well as cardano-cli, but don't worry: you won't be running a node inside the Air Gap. 😜

We will leave the definition of "forever" up to your understanding of Internet threats and whether these can come from OS package repositories, etc., with this in mind:

Precautions to avoid accidental connection to the Internet​

See your computer instructions to review how to get into the BIOS, if you're interested in disabling the network adapters at a very low level so they can't accidentally (or due to a hack) be turned on in software.

This will disable any Bluetooth services as well as WiFi, and shows as an Airplane on Ubuntu & other GNOME desktops as an airplane icon in the upper right corner of the screen.

With Airplane Mode always engaged, you would need the obvious Internet cable plugged in to have any network access (unlike WiFi which can often be connected by accident).

Some routers maintain a list of MAC addresses which will not be given an IP address by DHCP, which isolates them from the Internet unless that network interface is configured manually.

Therefore, you can find your WiFi MAC address and add it to your router's blacklist: usually in its DNS, DHCP, or LAN settings.

You now have a safe place you can use for your Secure Transaction Workflow.

This option may suit more demanding users, especially those:

If this appeals to you, and you don't mind following a more complilcated and error-prone installation procedure, you might want to install the Air Gap environment on a bootable USB drive instead. You can then boot a computer from this drive to have access to your secure resources and cardano-cli while isolating that computer from the Internet as well as any malicious software that might be installed on that computer.

This loosely documented configuration has been called the Frankenwallet, with separate instructions at this link which mostly follow the procedure above and include semantics for using your bootable USB environment in secure & blockchain workflow:

The Frankenwallet procedure is external to (and not maintained or endorsed by the owners of) the Developer Portal.

Also: these instructions may be difficult or unsafe to follow unless you have experience with "dual boot" Linux installations and other custom OS & booting configurations.