Skip to main content
Join the Cardano Stack Exchange and get your questions answered today. ⭐️Join us! 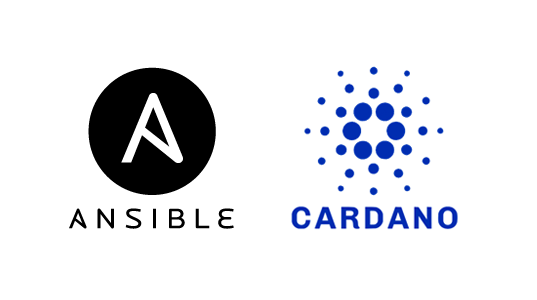 The Ansible cardano-node repository contains an Ansible playbook for provisioning secure, optimized Cardano nodes for Stake Pool Operators (SPOs). It was originally developed by the MOAI Pool (Ticker: MOAI) operators but is now being made available to the greater Cardano community.

The following is handled out of the box:

To facilitate the above the following minimal software packages are installed:

Ansible is an automation tool for provisioning, application deployment and configuration management. Gone are the days of SSH'ing into our servers to run a command or hacking together bash scripts.

Ansible is completely agent-less, meaning no special software is required on the remote hosts. All commands are run through Ansible via SSH.

Commands executed via Ansible are idempotent, meaning they can be safely run multiple times without anything being changed, unless required. Need to ensure a cardano-node configuration is up-to-date on all hosts? Simply run the command and Ansible will ensure only those that need the update will receive it. All other hosts will remain untouched.

Ansible is an extremely popular open source project with hundreds of available modules.

A single control machine can be setup to execute Ansible commands. The example below uses OS X, but any platform with Python installed will work (including Windows).

Note: Ansible is written in Python, but it isn't necessary to code in Python. You never have to touch Python unless you want to. The Ansible scripts themselves are written in the very simple YAML format.

First, verify that pip is installed:

Then install Ansible and the netaddr Python package. The latter is used by the ipaddr() filter in our Jinja2 templates:

Alternatively, if you have Homebrew installed (surely you must) then you can install Ansible like so:

Once the installation has finished you can verify that everything installed correctly by issuing:

Playbooks are a way of chaining commands together, essentially creating a blueprint or set of procedual instructions. Ansible executes the playbook in sequence and verifies the result of each command before moving onto the next one. If you cancel the playbook execution partway through and restart it later, only the commands that haven’t completed previously will execute—the rest will be skipped.

Some basic playbook terminology is given below.

Templates are files containing some variables and expressions, which we can replace with the corresponding values using the Ansible template module. This helps to make the file reusable since the same file can be used dynamically for configuring many servers.

Hosts and group variables are part of Ansible's inventory setup to manage individual hosts and logical groups of hosts (detailed below). This negates the need to remember individual IP addresses or domain names. It also provides a simple method of managing host-specific configurations.

Handlers contain logic that should be performed after a module has finished executing. They work very similar to notifications or events. For example, when the ufw configuration has changed the handler restarts the firewall service. It’s important to note that these events are only fired when the module state has changed.

The basic directory structure used to organize the playbook is shown below:

All the various Ansible tasks, handlers, configurations and so on are contained above. The specifics are described in the following sections.

Before doing anything else, we need to tell Ansible what will run where. Ansible works against multiple managed nodes or hosts in our infrastructure at the same time, using a list or group of lists known as inventory. Once our inventory is defined, we can use patterns to select the hosts or groups you want Ansible to run against. The simplest approach is to declare a single hosts file that contains all known hosts. This file can be in INI or YAML format. An example hosts INI file is shown below:

This inventory setup works well for simple configurations, but shows its limitations as the complexity of a configuration grows. For our purposes, a better approach is to break a single hosts delcaration into functional groups. There are no hard and fast rules about this organization pattern, which is one of Ansible's strong suits. However, this flexibility can also be somewhat daunting when designing an inventory from scratch. We can create groups that track:

For our purposes, we have chosen a combination of the "what" and "when" group structures. Let's look at a high-level overview of our inventory group structure:

You can see that each of these groups correspond to a unique node type. Within block-producer we find an INI file like so:

Here the Ansible user deploy is used throughout, although a different user with specific rights/capabilities could be defined for each host. You can also see that the functional (or "what") groups are defined here with each of the fully-qualified domain names (FQDN) corresponding to a production backend host.

For security reasons, you may wish to obfuscate, or hide, your block producer(s) public IP addresses. In this case, you may replace the FQDN in the example above with an IP address. The end results are the same.

Groups are nice for organization, but they are also used to handle variables. For example, the file /groups_vars/all has the following definitons:

This is a very minimal example. However, you can think about how group_vars can be used to store variables or other settings on a functional or per-group basis.

Ansible provides a vault facility to encrypt data such as passwords or keys, rather than as plaintext in playbooks.

We enhance security and ease of use by requiring public key authentication for our user accounts. Thereafter Ansible only interacts via the deploy account.

Set a strong password for the new user: passwd deploy. You'll use this once when adding your public key in the next step. Thereafter passwords won't be needed by Ansible.

Now try logging into the machine with ssh deploy@relay1.mypool.com to verify that the key was added successfully.

Login as the deploy user and verify that you have sudo access with the -v (validate) option:

You will probably want to change the default shell to bash:

Tag are attributes that can be defined in an Ansible structure and used to selectively execute a subset of tasks. Tags are extremely useful because they allow us to run only a specific part of a large playbook, rather than running everything in it. Tags can be applied to many structures in Ansible, but their simplest use is with individual tasks. The example below shows two tasks within the cardano-node role that use different tags:

When running a playbook, you can use –tags or –skip-tags to execute a subset of tasks. You can also see which tasks will be executed with these options by combining it with --list-tasks. For example:

An example playbook execution is shown below. This playbook targets the relay-node inventory using vault credentials. The optional --tags specify tasks tagged as "configuration" settings. Finally the --check mode is a "dry run" option that does not make any changes on remote systems:

Assuming the host file is populated and the hosts are accessible, you should see some output like this: 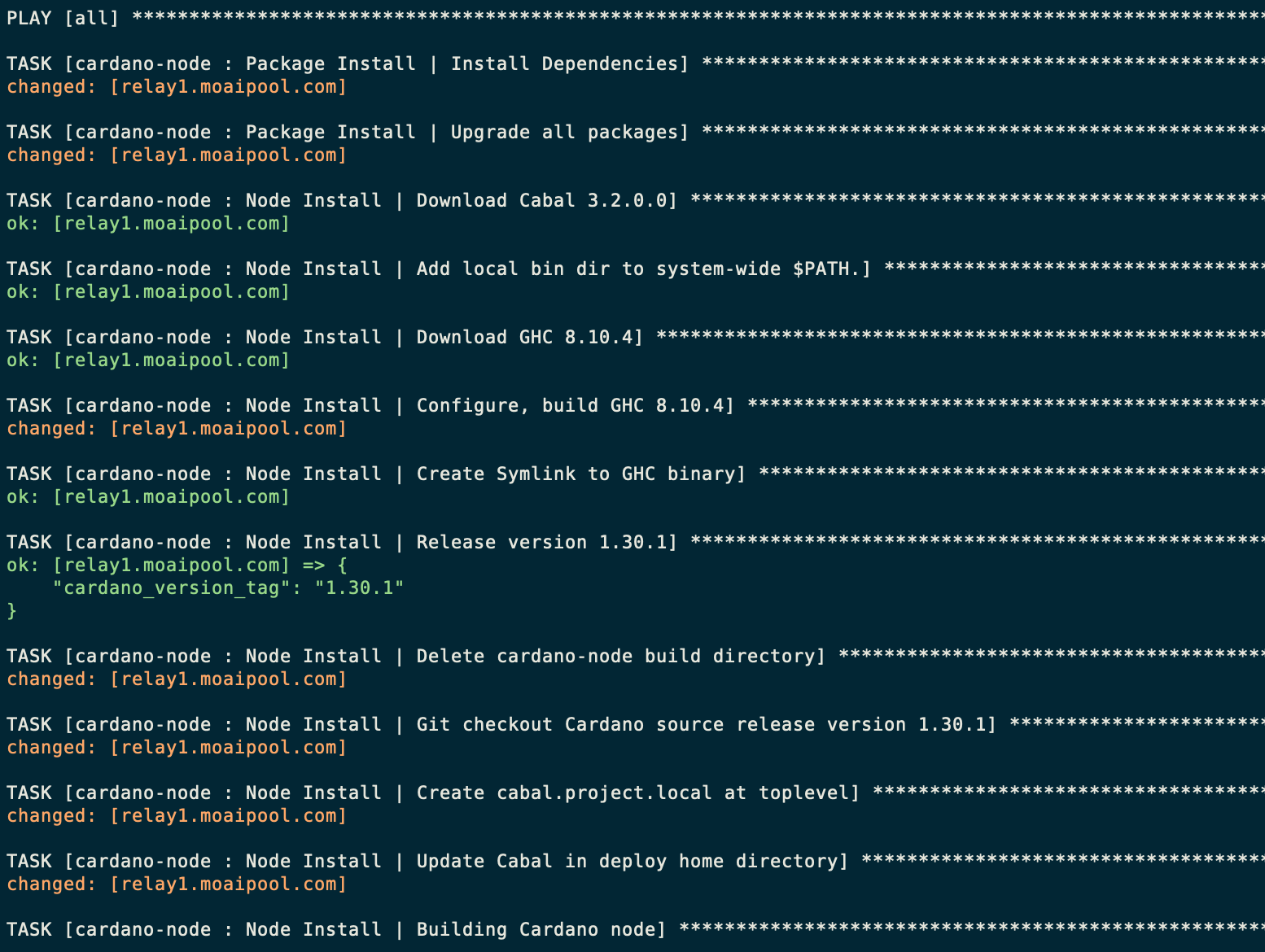 The process above includes downloading and compiling cardano-node from source, along with the latest dependencies, if needed.

A set of known-good base settings are provided in this playbook. Where applicable, under each role you will find a file called /defaults/main.yml. These files contain default values for variables and should be modified prior to provisioning a live host. For example, the ssh role applies several Linux security best practices to harden secure shell access to your nodes. The file ssh/defaults/main.yml should be modified to match your remote administration IP address (that is, the machine you execute Ansible from):

The ufw role configures the Linux firewall service and requires that the following default values be defined:

The placeholder values for the relay nodes above must agree with your real relay host IP addresses, else they will not be able to communicate with the block producer or each other.

Likewise, the file cardano-node/defaults/main.yml contains values that will be used to populate your pool's metadata. These placeholder values should be replaced:

Be sure to define your inventory before executing the playbook. The inventory file for your relay nodes must contain FQDNs for each of your relays. This file exists in inventories/relay-node/inventory:

Likewise, assign a public IP address for your block producer. This file exists in inventories/block-producer/inventory:

Use Ansible's --check option when executing a playbook for the first time. This will safely execute the playbook and check for any errors without modifying your hosts.

If you have manually configured your Cardano nodes in the past, it is strongly advised that you start with a fresh install of Ubuntu 20.04 LTS and execute your Ansible playbook against this new host.